Simon and Antoine were trained as diamond workers in Istanbul. With the outbreak of violence against their community, they fled to Belgium but were forced to flee again, when that country became caught up in the First World War. This time they went to the Netherlands. In 1916 they both joined the ANDB.

Photo of Antoine Tokatlian, from his aliens’ case file in Antwerp. Felix Archief Antwerpen, Vreemdelingendossier no 995#6473 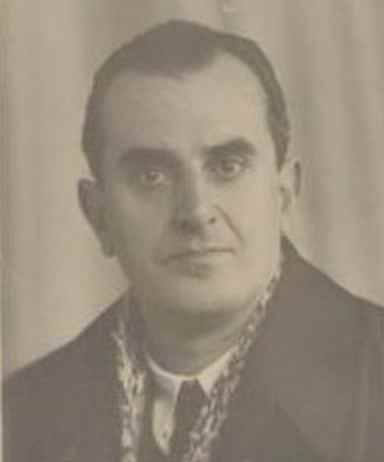 An Armenian family in Istanbul and Antwerp

As the oldest, Antoine was born on 19 May 1891. Two years later Simon was born on 23 December 1893. The other children in the family were Lucie and Marie. When they were still very small, violence against the Armenians intensified. By 1896-1897, civilians and military widely pillaged and looted the property of Armenians. Armenians were killed and driven into exile.

When the acts of violence against their community flared up again, the Tokatlians sought international protection. The French consulate gave them permission to flee to Belgium.  In 1912 they settled in Antwerp, already home to several Armenian families. Simon and Antoine rented a place to live on Tweelingenstraat in the Zurenborg quarter, in the heart of the Armenian community. Antoine took a job as a foreman at a carton factory. Whether Simon found work is unclear. 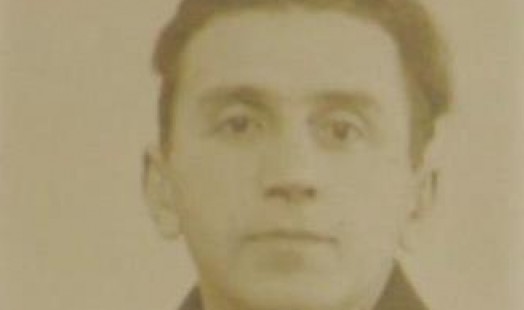 Photo of Simon Tokatlian, from his aliens’ case file in Antwerp. Felix Archief Antwerpen, Vreemdelingendossier no 968#20560

But the brothers were not safe in Antwerp either. On 4 August 1914 war broke out, and a large share of the Belgian diamond workers was called up. Others fled, including Antoine and Simon. Together with over one million Belgians, they ended up in the Netherlands. The Dutch authorities hastily set up camps to accommodate the refugees. Antoine and Simon were interned at the refugee centre in Nunspeet on the Veluwe. For a few years they stayed at the Hildebrand barracks. 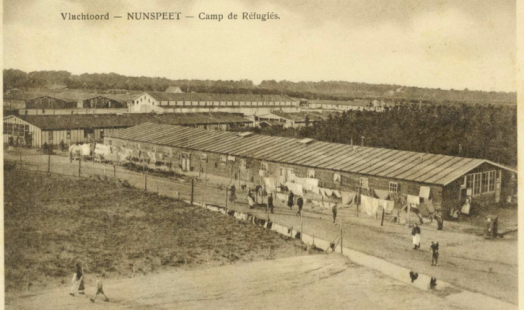 Because the war led to a shortage of rough diamonds, the Algemene Nederlandse Diamantbewerkersbond [General Diamond Workers’ Union of the Netherlands, ANDB] prohibited Belgian diamond workers from leaving the camp, thereby preventing them from going to work. Amsterdam also refused to admit the refugee members of the Algemene Diamantbewerkersbond van België [General Diamond Workers’ Association of Belgium, ADB]. The ADB strongly reproached the ANDB for this state of affairs. Only in 1915, when the industry resumed operations, and it became clear that the war would not be over soon, did the ANDB relent, lifting the injunction against leaving the refugee camp. To deter them from working off the books, Belgian diamond workers were made full members of the Union in 1916, including Simon and Antoine, on 5 December 1916. The previous month they had been entered in the Amsterdam register of population and aliens. At the time they stayed at a boarding house on Nieuwendijk, with Mr Mierlo.

Antoine joined Section 3 in the ANDB and as such went to work setting brilliants. Simon polished brilliants. Both paid dues for three weeks, after which they left the ANDB and returned to the camp in Nunspeet.  Antoine ended his membership on 8 January 1917, as did Simon on 18 January 1917. Whether they earned any income as diamond workers during those few weeks is unknown, as is the reason for their departure. Antoine, the oldest, returned to Antwerp directly from the camp. Simon, however, made another attempt to work in the Amsterdam diamond industry. On 16 October 1917 he joined the ANDB again, boarding with Baars at 17hs Korte Kattenburgerstraat at the time.

Simon paid his membership dues for three weeks but was unemployed for the rest of the year. In 1918 he fared no better. Still unemployed, he was expelled on 3 July pursuant to Article 6 (2). The board of the ANDB had the right to expel a member no longer willing or able to practise the trade. In March 1919 Simon joined the ANDB again and paid dues for 7 weeks. On 28 April he permanently left for Antwerp. 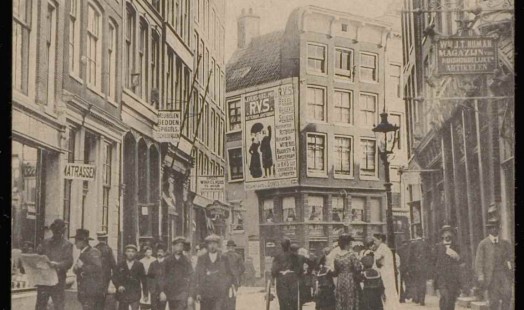 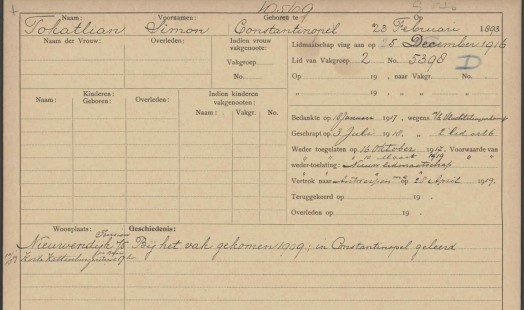 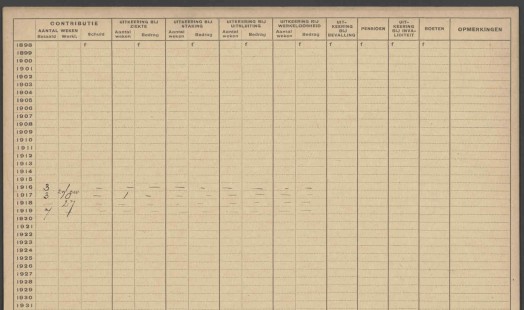 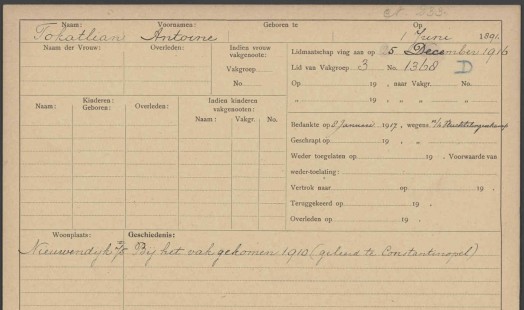 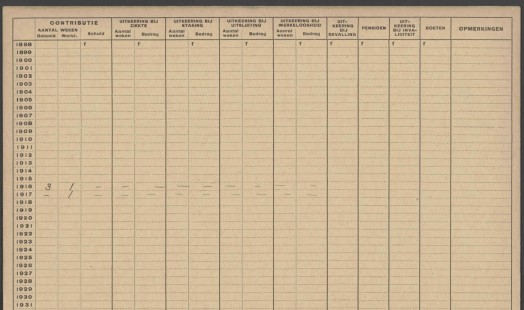 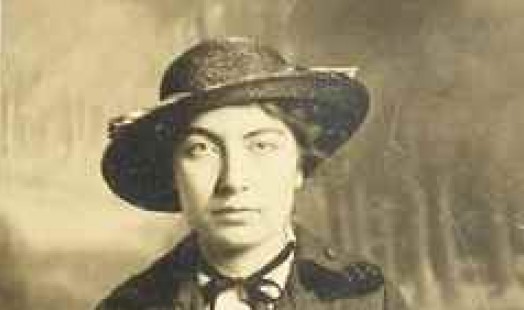 Simon and Antoine were once again living in the same city. Simon lived on Tweelingenstraat, where his sisters Lucie and Marie became his neighbours on 5 May 1920. They had survived the Armenian genocide but fled Turkey nonetheless. Simon sponsored his sisters and supported them financially. By this time he was a diamond worker again and had joined the ADB. His sisters did not work and boarded with a widow. That same year Simon married Yevkine Manoukian, also an Armenian who was born in Istanbul and had fled to Antwerp. When Germany invaded Belgium, she travelled to England. In 1924 a son, Noubar Leo Gregoire, was born to Simon and Yevkine.

Since fleeing Turkey Simon’s brother, Antoine had not been active as a diamond worker. In Antwerp he worked in a carton factory before and after his stay in the Netherlands. During his few months in Amsterdam, he did not succeed either. After returning to Antwerp, he married a local woman, Joanna-Maria Mertens, in 1921. Antoine died in Borgerhout on 11 June 1947. 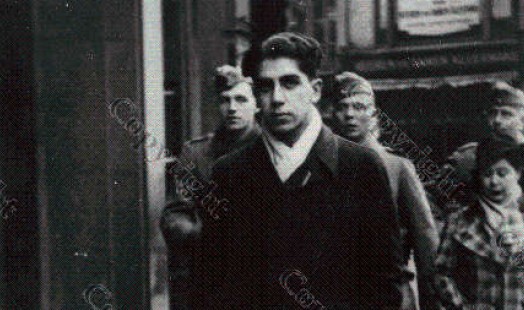