During the Cape period Henri Polak’s father advanced to working as an independent jeweller. Still, a second bread winner was needed in the family that ultimately comprised eleven children. He therefore took his eldest son Henri out of school to train as a brilliant cutter at age 13. When he was 18, Henri went to London to work in the British diamond industry, which was run mainly by (descendants of) Dutch diamond workers. Here Henri became imbued with socialist ideology and met his wife-to-be Milly Nijkerk. 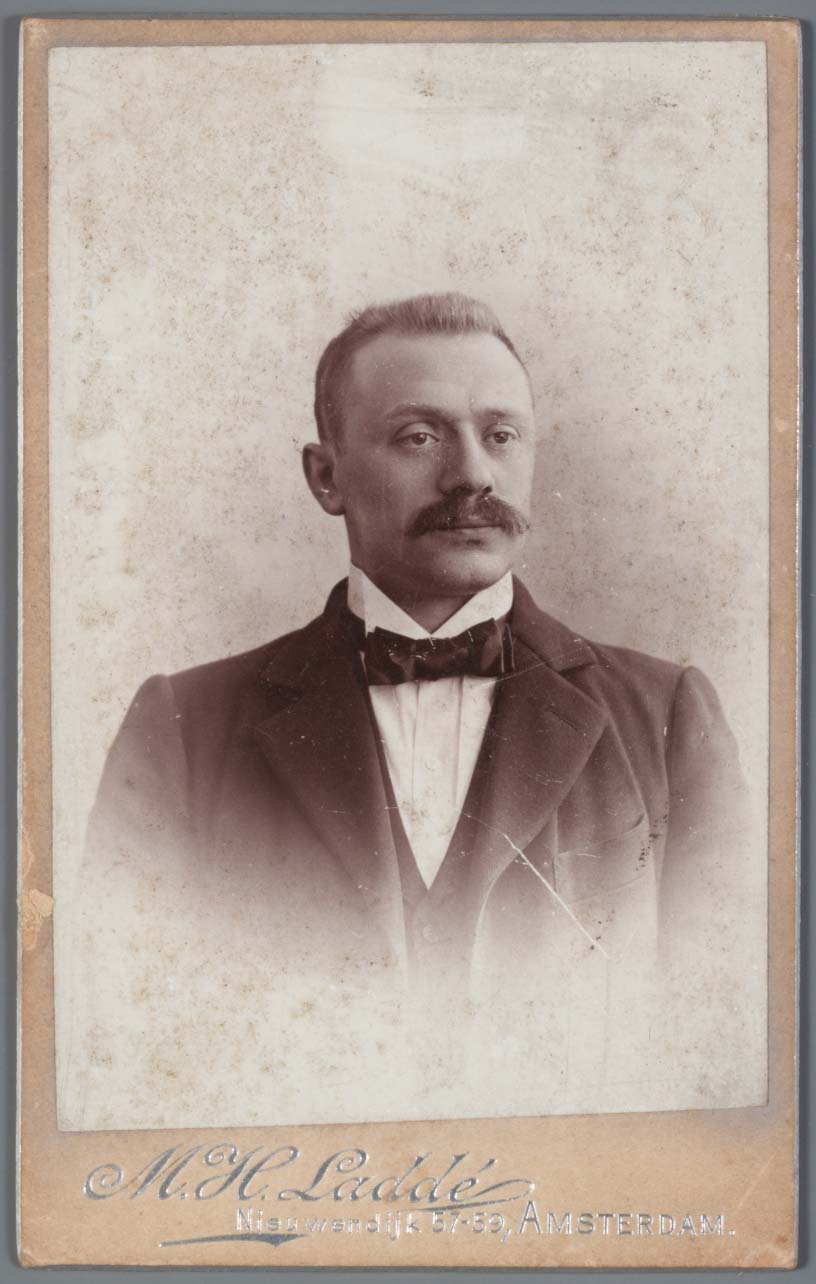 Upon his return from London in 1890, Polak found a job at the cutters and cleavers workshop of Andries van Wezel on Prinsengracht, where he met Jos Loopuit, Herman Kuijper, and Dolf de Levita, as well as Franc van der Goes. At the time Van der Goes was still working as an insurer, had an office nearby, and often stopped in at Van Wezel. Van der Goes told the diamond workers about parliamentary socialism, and they talked at length about art and culture. Polak later said that his time at this workshop ‘deeply influenced my subsequent life and work.’ [1] Together with De Levita, Kuijper, and Loopuit, Polak tried to revive the Nederlandse Diamantbewerkers Vereniging [Dutch diamond workers’ association] (NDV), after Jan van Zutphen resigned as chair for health reasons. Polak edited the NDV periodical De Diamantbewerker and became involved in the Sociaal-Democratische Propaganda Club ’t Centrum, which catered specifically to Jewish workers. This helped recruit Jewish diamond workers and convince them to join the great strike that broke out in November 1894. 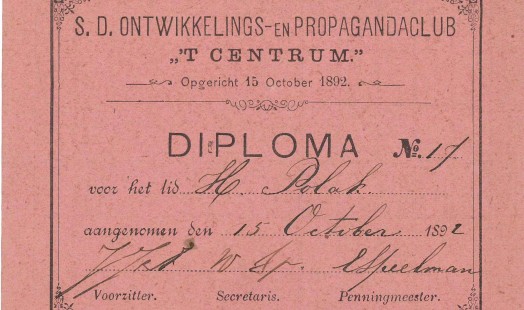 The November strike of 1894 and the establishment of the ANDB

The strike that started at the Drie Fontijne chip polishing factory on 5 November spread, and by 7 November all non-Jewish cutters in the Pijp and Jordaan neighbourhoods of Amsterdam laid down their work. The striking workers marched to the Plantage and Jewish neighbourhoods to convince the Jewish polishers to join the strike. Jan van Zutphen and Henri Polak formed a strike committee and published a special issue of De Diamantbewerker, appealing to Jewish diamond workers to lay down their work as well. They did so en masse, and on 8 November an enormous gathering assembled on Museumplein. The next day Polak and Loopuit negotiated with large numbers of jewellers, who soon agreed to higher rates. On 18 November 1894 the Hoofdcomité der gezamenlijke Diamantbewerkers-Vereenigingen [chief committee of the joint diamond workers associations] emerged from this successful strike and was the precursor to the ANDB. Polak became the chairman and Van Zutphen eventually the secretary. 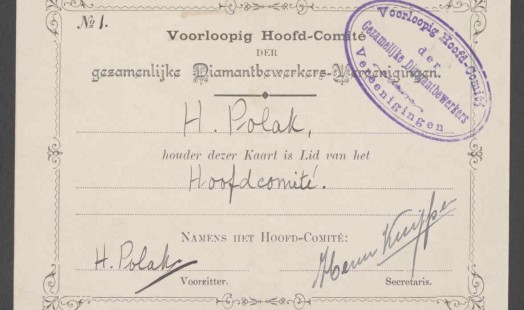 Polak and the course of the ANDB

Polak emerged as the strategist of the ANDB. He envisaged a professionally organized union, modelled after the British trade unions. Members would pay high dues to provide for ample strike funds and to appoint paid board members, who would devote all their time to union causes. Because of those dues, members knew they would receive benefits during strikes, lock-outs, sickness, invalidity, and unemployment.

During these early years all union officers worked hard to forge unity among the ANDB members. The ANDB weekly, edited by Polak, was an important cohesive force. In addition to trade union news and news about the diamond trade, it featured ‘edifying articles’ by Polak about art, literature, correct spelling, and healthy lifestyle. Ensuring the success of the union meant that everybody had to join, and the closed-shop system was therefore enforced among the jewellers: those who did not join would not have work. In addition, a hotly contested decision was taken not to train new apprentices for the time being to restrict access to the job market and mitigate unemployment in hard times.

To deter employers who found the Amsterdam wages too high from transferring their work abroad, Polak and Van Zutphen helped set up the union in Antwerp and were both cofounders of the Universal Alliance of Diamond workers, which Polak chaired until 1940. The ANDB strategy was highly successful: in 1911 the union was the first in Europe to achieve the 8-hour working day, and one year earlier a week of holiday leave (unpaid for the time being) had been introduced. Polak believed that the diamond workers should spend their leisure time wisely: they should engage in edifying pursuits, read books, take nature hikes and visit museums, the theatre and music performances. Many, especially the Jewish ANDB members, came to see Polak as a father figure they would turn to for advice. Historian Jaap Meijer described him as the ‘Rebbe of the diamond workers.’ Others, who were less appreciative of his authoritarian disposition, occasionally called him ‘Rooster cock’.[1]

Celebration in recognition of the 8-hour working day 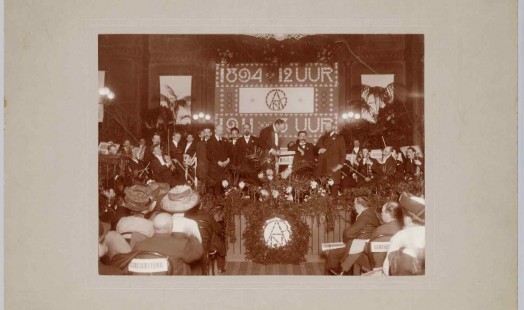 Celebration in recognition of the 8-hour working day, Collection IISH.

Polak first entered politics with the Sociaal-Democratische Bond [Social-Democratic Union] in 1890 but in 1894 opted for the reformist course and was one of the twelve apostles who founded the Sociaal-Democratische Arbeiderspartij [Social-Democratic Labour Party]. He was a member of the party executive, served as party chairman from 1900 to 1905, and was the first social democrat to sit on the Amsterdam city council, representing his party there from 1902 to 1906. He represented the SDAP in the Dutch Senate from 1913 to 1937, with an interruption, when he was a member of the House of Representatives very briefly in 1913. All the same, his biographer Bloemgarten did not believe that Polak had the ‘equally important ability for a politician of compromising for the cause’. [1] After 1906 he literally moved away from politics and public life by settling in Laren and dedicating his efforts to nature conservation and monument preservation.

Polak in the Amsterdam city council 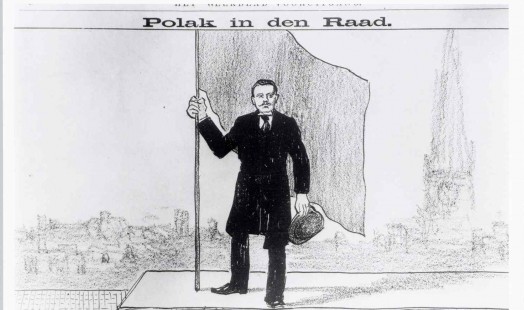 Print in recognition of the election of Henri Polak as the first social-democratic member of the Amsterdam City Council. IISH Collection.

From the moment the Nazis came to power in Germany, Polak condemned all forms of collaboration with the Nazis with unprecedented virulence. He did so in the ‘Kroniek,’ his weekly column in Het Volk, as well in the Senate. Observing that the Nationaal-Socialistische Bond was a threat to democracy, he advocated prohibiting that party and relentlessly warned of the dangers of anti-Semitism. This was not always appreciated – including within SDAP circles – and some reproached him for his obsessive concern. In his last column in Het Weekblad van de ANDB (9 May 1940) he wrote about Erasmus and the horrors of war.

Polak went into hiding briefly, returned to his house in Laren, and was then arrested on charges of anti-German ‘incitement.’ After being held for six months at the Amsterdam prison, he was detained at the Wassenaar home of a physician who supported the NSB party of Dutch Nazi sympathizers. In July 1942 he was released unexpectedly. Although his imprisonment seriously damaged his health, he believed that he was bent but not broken. In the diary he kept in the years 1940 to 1942 he made the constriction of his imprisonment palpable. [1] On 17 February 1943 Henri Polak died of pneumonia in a hospital. He was spared the fate of deportation, but his wife Emily was sent to Westerbork shortly after his death and died there in May 1943. 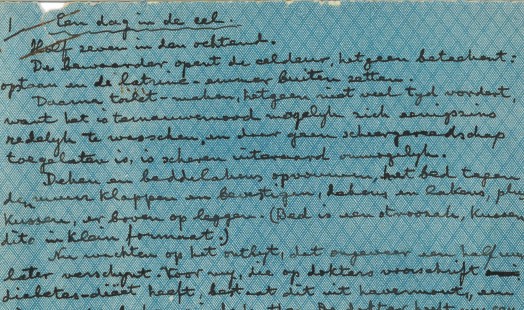