At age thirteen, Van Zutphen fell from a scaffold and sustained serious injuries. His concerned father advised him to opt for the safer occupation of diamond polisher. Skilled at his trade, he was a brilliant polishers’ foreman by the time he was twenty.  In November 1894, he was the leader of the great strike in the diamond industry, which culminated in the establishment of the Algemene Nederlandse Diamantbewerkersbond [General Diamond Workers’ Union of the Netherlands] (ANDB). 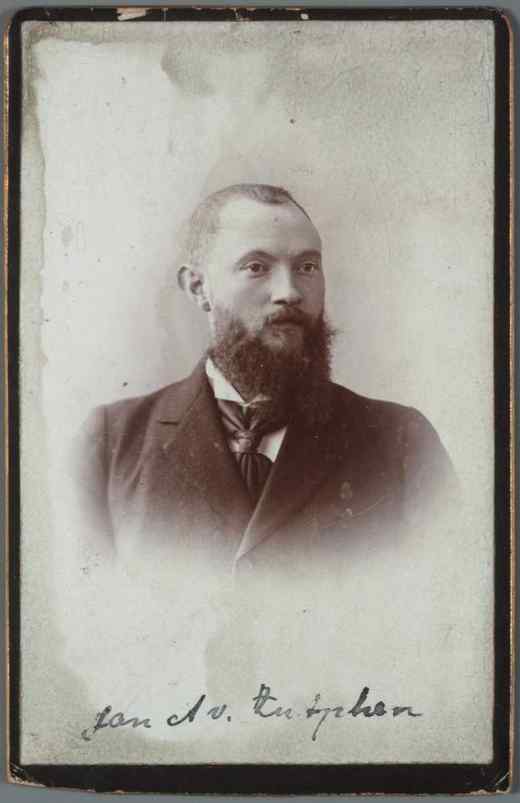 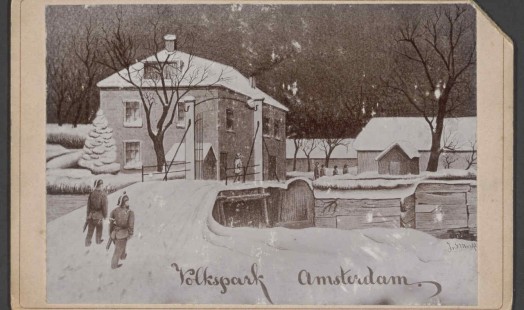 In 1883 Jan van Zutphen joined the Sociaal-Democratische Bond [social-democratic league] (SDB), and five years later he became chairman of the Sociaal-Democratische Diamantbewerkersvereniging [social-democratic diamond workers’ association] founded by the SDB. This association had very few members and some time later broke away from the SDB to become the Nederlandse Diamantbewerkersvereniging [Dutch Diamond workers association]. Many Jewish diamond workers would have no part of socialism at the time, and the union hoped to attract more members this way. Although the name change made little difference, in 1892 Henri Polak, Dolf de Levita, and Herman Kuijper tried to revive this trade union. Van Zutphen later praised Polak and De Levita for ‘their discerning and energetic combativeness.’ [1] Only in 1894 were the diamond workers truly ready for action and organization. 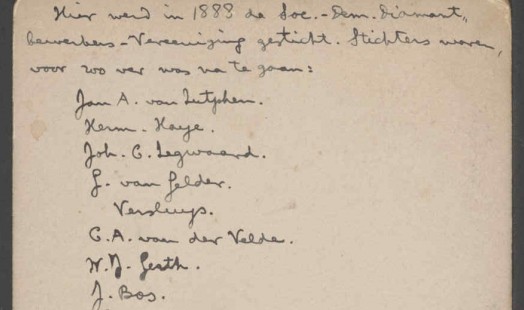 This is the rear of the postcard of the Volkspark. In 1888 the Sociaal-Democratische Diamantbewerkersvereniging was founded here. IISH collection.

1894: the great November strike in the diamond industry

By the late 1890s little demand remained for polished diamonds. Many polishers were unemployed, and those who still had work were given stones of ever poorer quality. Among the most affected were the chip polishers, who polished the inferior small stones. They earned progressively less for this work, especially because their overhead costs were high: they had to pay rent for their own polishing mill, as well as the wages of their setters, while the jewellers (their commissioning agents) charged far too much for the boart, diamonds crushed to powder to be used for polishing diamonds. The situation became desperate, when batches of deeply inferior diamonds arrived from Brazil. One week later, most chip polishers had not even covered their input costs. ‘After such a week of great struggle and highly stressful work, desperation and embitterment prevail,’ noted Van Zutphen. [1]  The chip polishers at the diamond polishing factory ‘De Drie Fontijne,’ where Van Zutphen worked as the foreman, sent him to several jewellers to advocate a rate increase. The jewellers agreed to accommodate this request, but only if other jewellers did the same. ‘That meant that a strike was necessary,’ noted Van Zutphen, adding: ‘From all misery emerges the flame of resistance. The flame of resistance will devour the misery,’ reads the poem by Henriëtte Roland Holst composed under the murals by her husband Richard Roland Holst in the Union Council room in De Burcht. [2]

On 5 November the workers at De Drie Fontijne laid down their work, and those on strike went to the other polishing factories (of which there were 63). The next day a large gathering was organized on Museumplein; the mass assembly received extensive press coverage. A strike committee was formed, with Henri Polak among its members. This committee negotiated with the jewellers, minimum rates were adopted, and polishers were no longer required to purchase boart from jewellers. Following this successful strike, the ANDB was formed on 18 November 1894. ‘Henri’s […] skill as an orator and writer and his organizational talents were conducive to founding Algemene Nederlandse Diamantbewerkersbond. […] At the time our team effort came to symbolize the two large groups of fellow tradesmen of Jewish and Christian origin,’ explained Van Zutphen. [3]

Diamant workers at the 25th anniversary of the ANDB 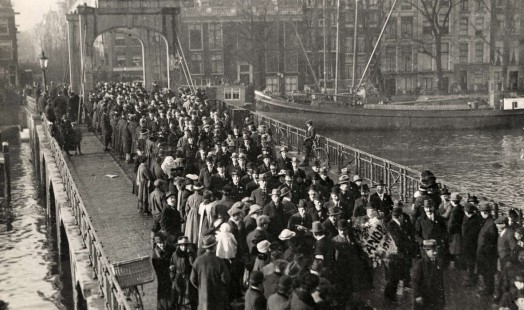 In 1919, when the ANDB was celebrating its 25th anniversary, a procession of diamond workers repeated their march through the city on 6 November 1894. In this scene they appear on the Magere brug. Photo Spaarnestad collection. https://resolver.kb.nl/resolve?urn=urn:gvn:SFA03:SFA022809143

Van Zutphen in the ANDB and the ADB

As secretary to the ANDB, Van Zutphen became the right-hand man of Chairman Henri Polak, who had to spend his time on ‘great work’ and the ‘broad task’: envisioning the form of the organization and the future of the ANDB. As an organizer, Van Zutphen was crucial in setting up the ANDB and in managing the operations of the trade union. He had exceptional communication skills and was able to bridge differences and help resolve conflicts. He was highly persuasive, deeply committed to social causes, and easily won people over through his clear, direct discourse. Soon known as ‘Uncle Jan,’ he and Polak were the heartbeat of the ANDB. Van Zutphen served as secretary until 1928.

In 1904, during the great labour conflict that lasted months in Amsterdam and Antwerp, in part about curtailing the number of apprentices, Jan van Zutphen temporarily chaired the Antwerp Diamantbewerkersbond [General Diamond Workers’ Association of Belgium] (ADB). Chairman Jan Bartels had to serve a prison sentence, because Article 310 of the Belgian Criminal Code provided for imprisonment and fines for strikers who made threats or offensive remarks. Excluding apprentices from the shop floor was a violation of Article 310 as well. To escape the same fate, Secretary Jef Groesser fled to the Netherlands. Van Zutphen intervened in Antwerp on other occasions as well, often mediating conflicts and bridging differences. [1]

Van Zutphen and the ADB 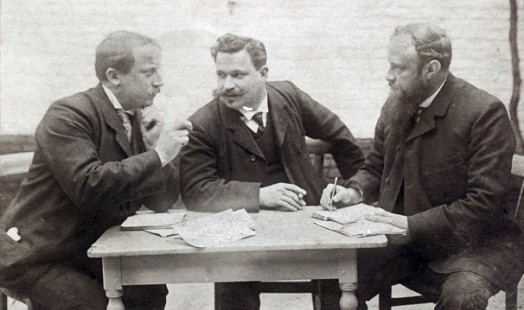 Universal Alliance and the NVV

Jan van Zutphen also served on the executive committee of the Universal Alliance of Diamond Workers, which was founded in 1905. By organizing all diamond workers’ trade unions together, the Universal Alliance aimed to form a strong counterweight to offset the power of the jewellers and dealers in rough diamonds. By agreeing on equal rates of pay and working conditions everywhere and aligning the number of new apprentices with demand for labour, the Universal Alliance hoped to set the supply and price of labour. The Universal Alliance organized international congresses to help forge this alliance. The practical significance of the international congresses for Alliance executives and members is described in the witty booklet Over de bergen, in which Jan van Zutphen describes the journey to the International Congress of the Universal Alliance in Saint-Claude in 1907. The entire ANDB travel club came along and had a very eventful journey, including broken cars and hiking uphill for several hours carrying luggage. [1]   Closer to home, Van Zutphen helped found the Nederlands Verbond van Vakverenigingen (NVV) [Dutch league of trade associations] in 1905. 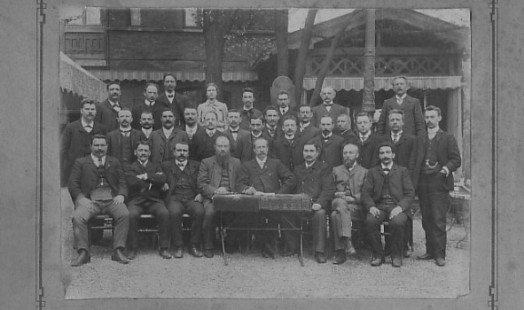 The founders of the Universal Alliance of Diamond Workers in Paris in May 1905. In the first row seated in the middle at the table is Jan van Zutphen. AMSAB-ISG Institute of Social History Collection

Van Zutphen lost his mother and eldest sister to tuberculosis, when he was 10 and 11 years old, respectively. The disease claimed the life of his first wife as well. When his close friend and fellow party member Johan Harttorff also contracted tuberculosis, Van Zutphen raised funds for his friend to be treated at a sanatorium. He repeatedly raised funds for diamond workers suffering from the disease and in 1905 founded the Koperen Stelen Fonds (KSF). When diamonds were cut, they would be placed in a copper cap attached to the tang with a small handle. After a while the handles were no longer usable, but the copper sold at a high price. The KSF collected the handles and donated the proceeds to tbc patients. In Antwerp another such fund was founded and was called Zonnestraal. At Van Zutphen’s initiative and with generous support from jeweller Abraham Asscher, a procedure was developed for extracting pure boart from polishing waste. In this and many other ways, enough funds were raised to build a sanatorium in Hilversum. Named Zonnestraal after the one in Antwerp, it opened in 1928. Van Zutphen became the chairman of the executive committee and struggled to eradicate TB throughout his life. 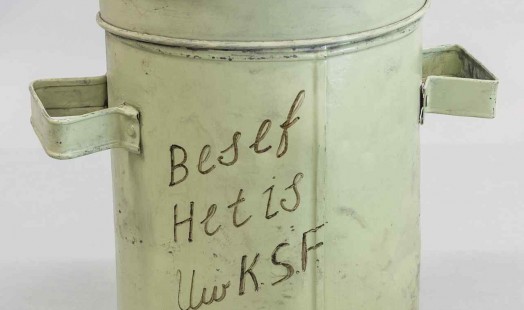 The war and afterwards

When the German forces of occupation threatened to deport the Jewish patients from Zonnestraal during the Second World War, the sanatorium was evacuated, and Van Zutphen resigned as chairman of the executive board. After the war he resumed all kinds of duties and was involved with Zonnestraal until 1956. He also remained active in the ANDB and was an important propagandist once more, when a strike broke out in the Amsterdam diamond industry in 1955. The decimated trade union achieved very little in the industry, which had largely been destroyed. On 25 June 1958 the ANDB ceased to be an independent union. Jan van Zutphen did not live to see that moment, as he died on 7 June 1958.