Diamond cleavers gave rough diamonds their initial shape. All kinds of things could go wrong, and cleavers therefore had the greatest responsibility and earned the most as well. Initially this made cleavers difficult to organize in the union. 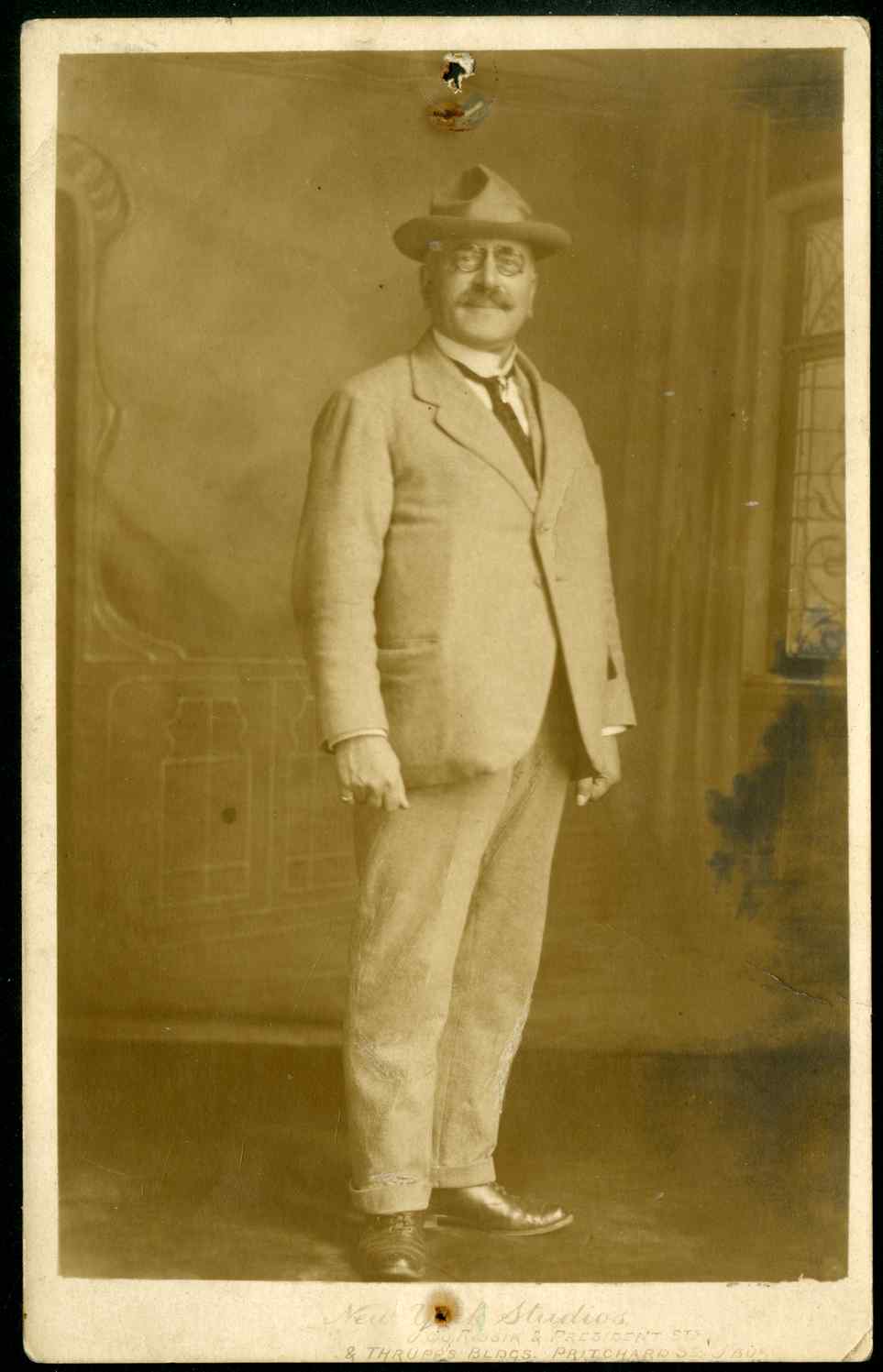 After several unsuccessful attempts in which Louis Gans was often involved, the Diamantkloofsters- en Kloversvereeniging [Association of women and men diamond cleavers] (DKKV) came about in 1898, with Abram Speyer as chairman and Louis Gans as secretary. In 1899 the association became a chapter within the ANDB. According to Jan van Zutphen, Gans was among the small group of diamond cleavers ‘that did not see themselves as vastly superior to the polishers and setters. Breaking with their arrogant surroundings, imbued with passion, they founded the ANDB cleavers’ chapter.’ [1] 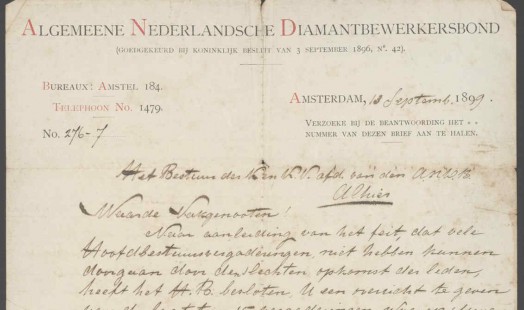 In this letter Jan van Zutphen informs the board of the Diamantklovers- en Kloofstersvereeniging that they have officially become a chapter of the ANDB. From the ANDB archive ARCH00210.4413

The great number of apprentices trained became a serious problem within the industry. Years later, Louis carefully analysed the problems that were specific to the cleavers’ trade: the trade was highly respected, and the work was thought to be very highly paid, although in practice poverty and underpayment occurred as well, precisely because too many apprentices were trained. Because the trade carried so much prestige, this poverty was rarely mentioned… In addition, the trade was in fact a family business, apprentices often operated at the workshop of a family member and were generally unwilling to engage in action. As training was very costly, opportunities for becoming a cleaver were unfairly distributed. The efforts by the ANDB to curtail the number of apprentices and ‘democratize’ the training were greatly appreciated and ultimately led many cleavers to join the ANDB.

Invitation to a meeting about the apprentice issue 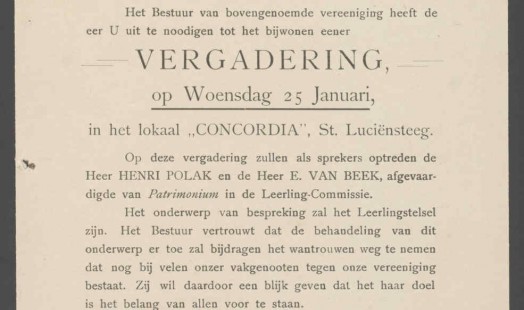 On 25 January 1899 the Diamantklovers- en Kloofstersvereeniging convened a meeting about the apprentice system. Although the name of the association clearly referred to the women cleavers, who definitely worked in the trade, the heading reads Dear Sir...

Career within and outside the trade union

In early 1899 Louis registered as a union member. By then, he lived – together with his parents and some of his brothers and sisters – at 1 upstairs on Plantage Kerklaan.

He was very active as the DKKV secretary but moved to Antwerp in 1900. By 1902 he was back in Amsterdam and became active on the Commissie voor Maatschappelijk Werk [edification committee] founded in 1903. One year later he became chairman of this committee, which arranged popular-scientific, literary, political and artistic lectures and courses, as well as botanical excursions to the Gooi and visits to famous buildings, such as the Beurs van Berlage. The chess courses that Gans offered were enormously popular.

In addition to his work for the Commissie voor Maatschappelijk Werk, Gans served from 1907 to 1913 on the Union Council tasked with running the Union and managing all institutions emerging from it. The Union Council also helped set wages and other working conditions. Van Zutphen reported that on the Union Council ‘thanks to his simplicity and profound clear judgement, [Gans] was universally liked and admired.’ [1] 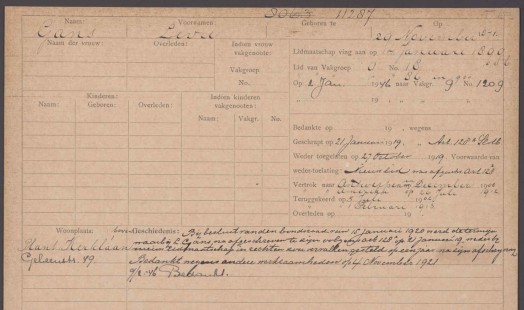 In 1890 Louis Gans joined the Vereenigd Amsterdamsch Schaakgenootschap [United Amsterdam chess society] and rapidly became a renowned chess player. He and his friend Abram Speyer were the life of the Amsterdam chess café scene. In 1910, when the ANDB launched Het Jonge Leven, a monthly for apprentices and young workers in the diamond industry, Louis Gans wrote a very popular series about chess in the journal. In 1923 those articles were gathered in Het Schaakspel: beschouwingen over het spel en zijn voornaamste beoefenaars. Later he started playing simultaneous chess with patients at the Zonnestraal sanatorium. 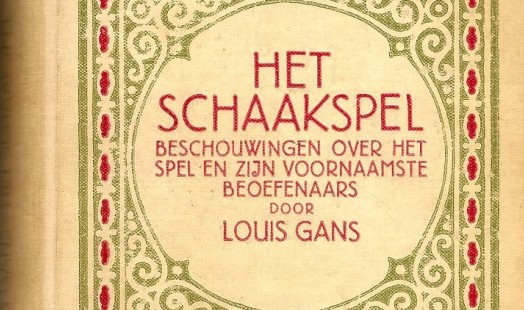 In July 1912 Louis Gans left for New York to work as a cleaver there. He said he intended to join the Diamond Workers’ Protective Union of America but was told that not one of the handful of cleavers in New York belonged to the union, and that the union could therefore do little to help in the event of possible conflicts. He observed that he was unofficially given to understand that he was not allowed to join the union. The consequences could be serious. Unable to pay dues, he would lose the rights he had accrued with the ANDB, should he ever choose to return. This was against the rules of the Universal Alliance of Diamond Workers. All affiliated unions – including the American one – had agreed that diamond workers who requested an official certificate from the union of their home country and joined a union abroad would retain their rights, should they return. In a subsequent letter he made clear that in any case he was not very happy in New York, although he did join the Manhattan Chess Club.

letter by Gans from NYC to the board of the ANDB 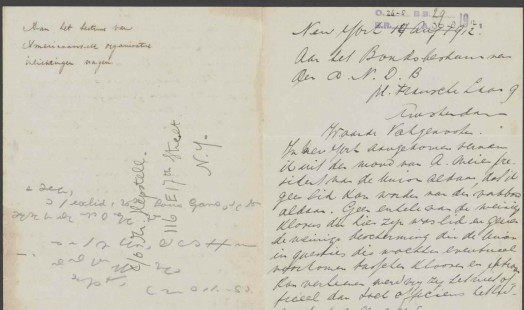 In this letter of 14 August 1912 to the ANDB board Louis Gans writes that as a cleaver he cannot join the American trade union for diamond workers. ANDB archive ARCH00210.3035.2

End of a brief American sojourn

Louis returned from New York within a year. He had worked at the studio of Andries van Wezel there and found the experience very trying. He decried the system of intense scrutiny that prevailed there. The workshop owner expected miracle cleavers to be able to do everything and with nerves of steel, according to Gans. He fell short of those expectations and, in fact, he admitted that he was fairly short tempered. He urged the ANDB to try to dissuade cleavers considering going to New York.

letter by Gans from NYC to the board of the ANDB 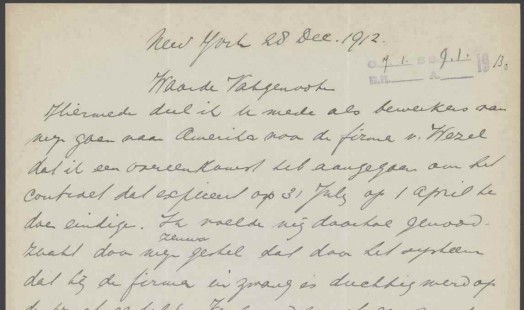 In this letter of 28 December 1912 to the ANDB board Louis Gans complains about the working conditions in the New York workshop of Andries van Wezel. ANDB archive ARCH00210.3035.2

Upon his return, Louis went back to the ANDB but was often without work: the First World War had seriously disrupted the industry. He worked temporarily as a tailor and went back to work as a cleaver in 1919. Then in 1921 he stopped and took up other work. He went to South Africa to purchase rough diamonds there for various major jewellers and settled in Johannesburg. After seven years there he moved to Antwerp as a diamond merchant. In 1930 he returned to Amsterdam, where he lived on Geleenstraat, in the Rivierenbuurt quarter. The next year, when he was 59 and without any occupation, he married Bessie Maguire, a Scotswoman. She was 48 and lived in London at the time. Over the years Gans continued to advance in chess and joined competitions abroad, where he may have met Bessie as well. 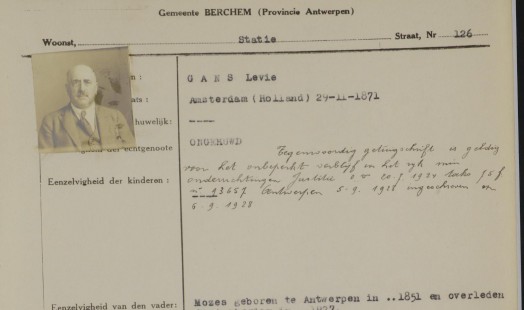 This aliens’ file reveals that Louis Gans settled in Antwerp as a diamond merchant in 1928. Felix Archive Antwerp Aliens’ file 986#14837

During the war Louis Gans was interned at Camp Westerbork. He was soon released from the camp, presumably because he was married to non-Jewish Bessie Maguire, although he found his period in Westerbork devastating. 'There we were (…) Maan Querido, Andries de Rosa (neither one returned), and I. three members of the debating club ‘De Olievlek’ on Roetersstraat, so many years ago. Warriors for rising socialism, idealists who believed in the progress of humanity through this socialism. Those workers – and they were mainly Jewish diamond workers – aimed to educate and teach, and there in Westerbork we witnessed their destruction.' [1]

In 1946 – when good diamond workers had become very scarce – he was briefly registered with the ANDB, he was by then 75 years old. According to Van Zutphen, time had not eroded ‘his noble head with his warm, shining, velvet-brown, witty eyes.’ [2] He died on 3 August 1947, 76 years old. 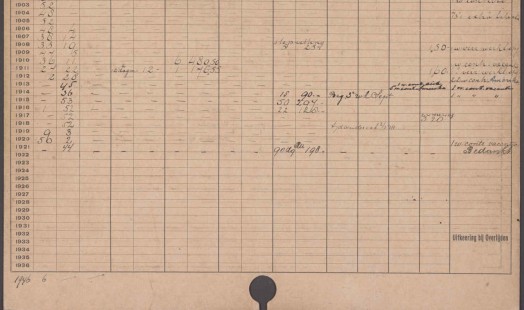 The rear of the ANDB membership card of Louis Gans reveals that he was a member of the ANDB very briefly in 1946.  ANDB Archive ARCH00210.9569.2