Salomon was born on Batavierstraat in Amsterdam in 1877. His parents were Catharina Agsteribbe and Gerrit Jacob Kleerekoper. While he was married, Gerrit worked as a blacksmith, and his son Salomon became a brilliant cutter. 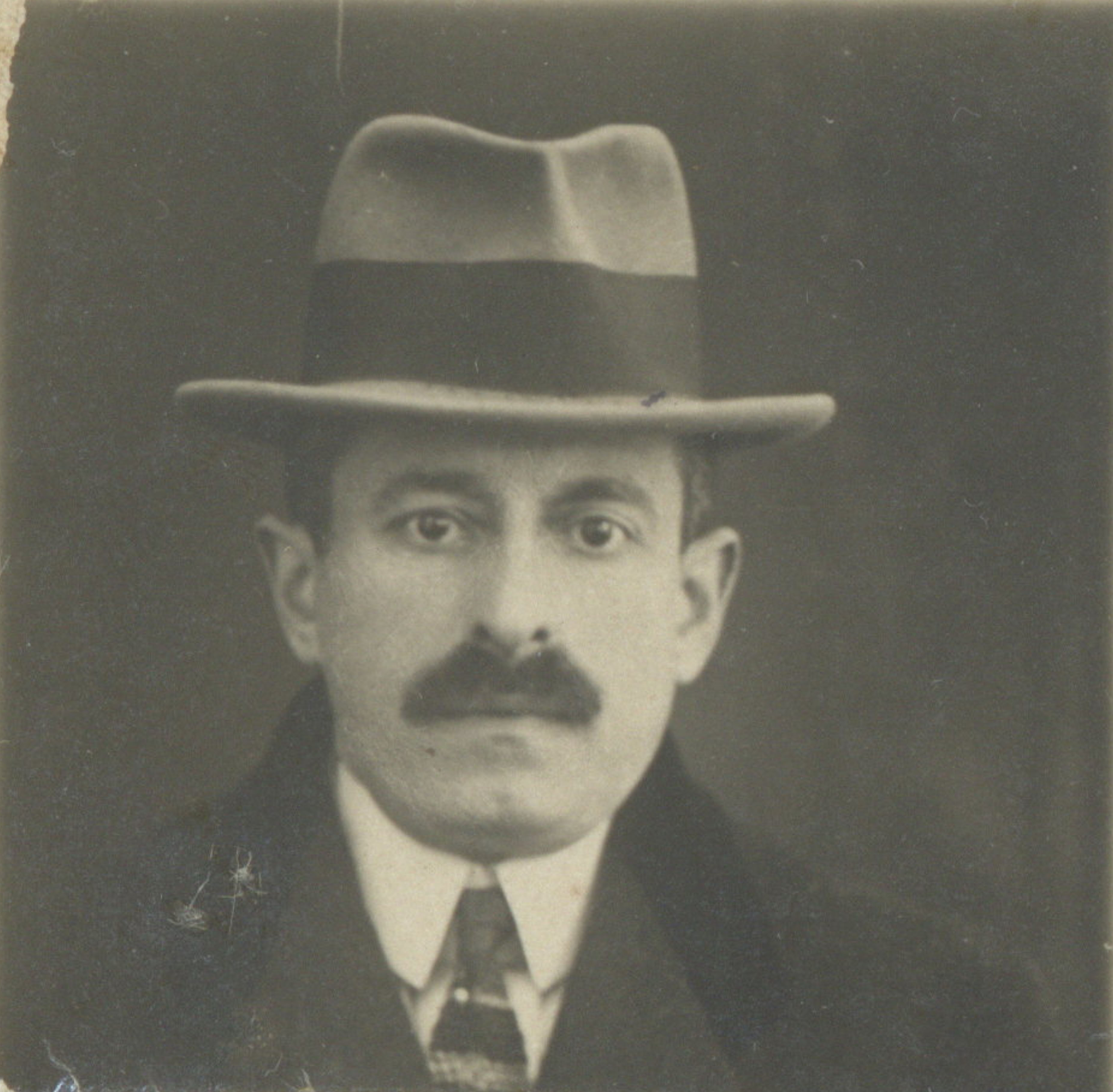 By 1894 Salomon joined the Briljantsnijders en snijdstersvereeniging [Association of men and women brilliant cutters]. Presumably he left the trade at some point, because his Algemene Nederlandse Diamantbewerkersbond [General Diamond Workers’ Union of the Netherlands] (ANDB) membership card indicates that he joined the union again on 1 March 1898. 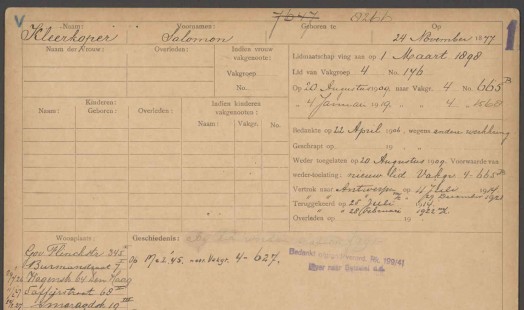 He was an active union member, who went on strike, when a strike was called, as reflected on the rear of his membership card, where various strike and exclusion benefits are listed. The causes he supported included increasing higher rates and a prohibition against hiring non-union members. He also supported the effort to stop unchecked recruitment of apprentices. 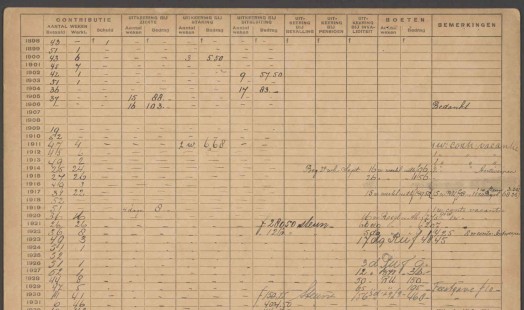 In 1905 Salomon married Rachel Isaac Klepman. The next year he left the union, because he took up a different occupation. In 1909 he returned to the trade and the union and had divorced Rachel as well. In 1910 is he was in Borgerhout (Antwerp) briefly. In addition to finding work there, he met his new wife Esther van Dam. In 1911 the couple married and settled in Amsterdam, where that same year their first daughter was born: Catharina. Five years later their daughter Celine was born. In 1914 Salomon – unemployed in Amsterdam – was in Antwerp briefly. He returned fairly quickly, presumably because of the First World War, which disrupted the Antwerp diamond industry.

In 1921 he moved to Antwerp for work again, returning only in 1922. In Antwerp Salomon continued to pay his ANDB dues, so that upon his return he would remain eligible for the support the union provided its members. From 1930 to 1933 is Salomon was more often unemployed than at work. Luckily, he received benefits from the ANDB. 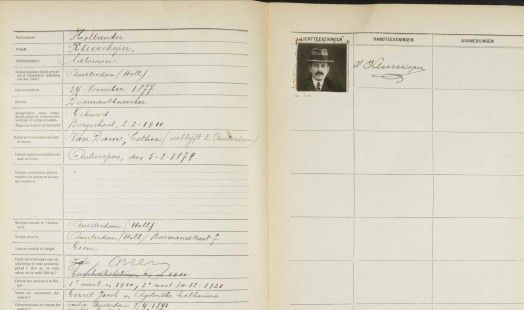 In the last years before the war, work was easier to find. Salomon worked mainly for the Soep firm and continued to do so until September 1940. Although his membership card indicates that he transferred to Betsalel on 14 March 1942, this is not mentioned in the archives. He did not apply for an exemption either but simply disappeared from the ANDB records and left his home on Smaragdstraat with his wife and two daughters to go into hiding. 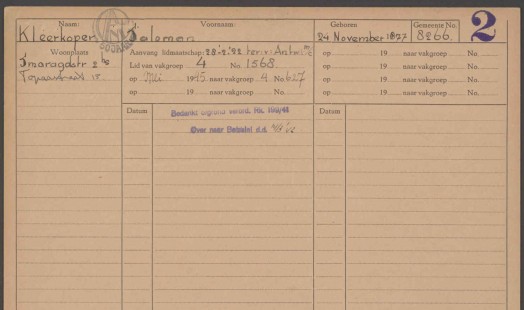 After the war Salomon learned that not one of his five brothers and sisters had survived the war. From the family of his brother Jacob, his daughter Catharina (Trien) Kleerekoper – whose husband Leo Althof was not Jewish – and her son Herman were still alive. Herman was in Brazil during the war. At the end of 1945 Trien wrote her brother several letters, describing the fates of their family members and of the extended Kleerekoper family. She admitted that she rarely visited Uncle Sal: ‘He reminds me too much of Pa.’ [1] 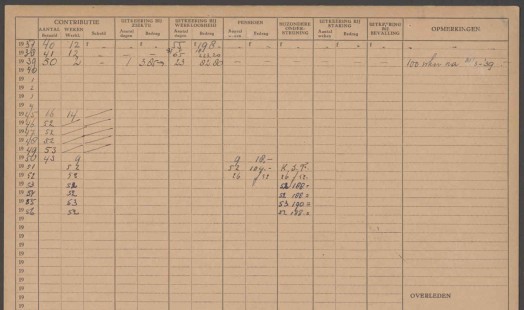 After the war Salomon picked up where he had left off and resumed diamond cutting. Salomon had plenty of work until 1950. In 1951 he took partial retirement. Upon receiving a Christmas package from the ANDB board and union council in 1953, he wrote a moving thank-you letter, noting: ‘As an old diamond worker, who has joined so much of the struggle, I have not yet lost hope that better times will come under your leadership and look forward to celebrating the 60th anniversary of the A.N.D.B., which also marks the 60th anniversary of my membership, in better times for the industry.’ His hope proved futile, as by 1958 little remained of the Amsterdam industry. In 1958 the ANDB ceased to operate as an independent trade union. Amply surviving the trade union, Salomon Kleerekoper died in 1965. 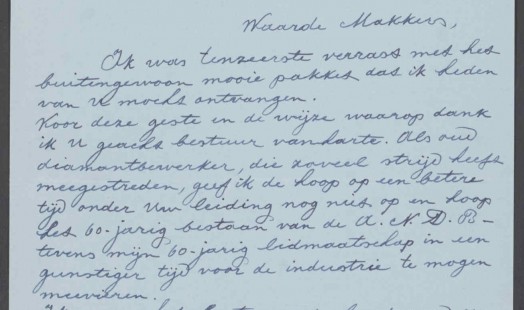