When Suze was three years old, her sister Marianne was born. Both were trained as brilliant cutters and subsequently joined the Algemene Nederlandse Diamantbewerkersbond [General Diamond Workers’ Union of the Netherlands] (ANDB). During the German occupation they obtained a Sperre and later were even among the group of diamond workers protected until May 1944, when they were deported after all. Only Suze survived the camps and wrote a candid account about it in the Weekblad van de ANDB. 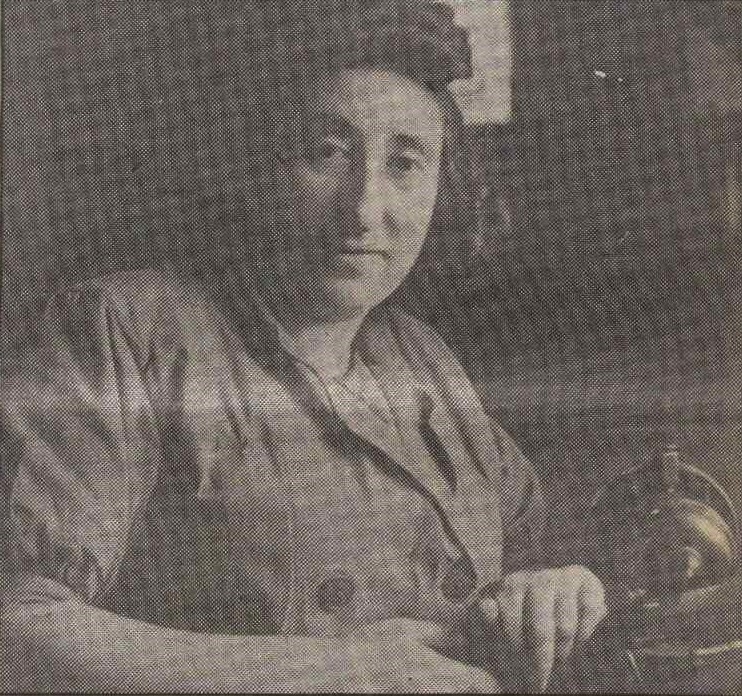 With two parents active in the diamond industry, the sisters absorbed the trade from the cradle. ‘As children my sister and I would be given two matchsticks. My mother would add a dab of cement, then we would get a grain of sugar and were told to keep rubbing it. That was how we simulated diamond polishing.’ [1] Nonetheless, Suze started at a workshop for seamstresses and later worked as a clerk in the paper industry. In the end, she joined the diamond industry after all, in part because of encouragement from her father. She did not enjoy sewing lingerie and felt that both jobs were poorly paid. Suze started training as a brilliant cutter in 1925, when she was an apprentice to W. Wertheim at the Rooselaar factory, where she finished over two years later. She joined the ANDB immediately. 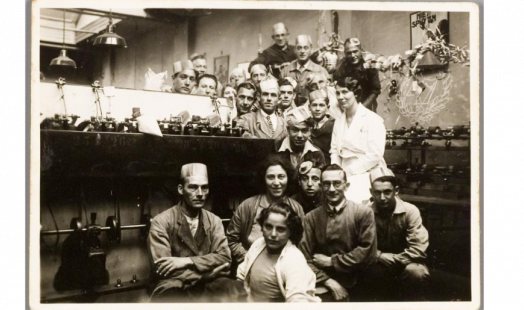 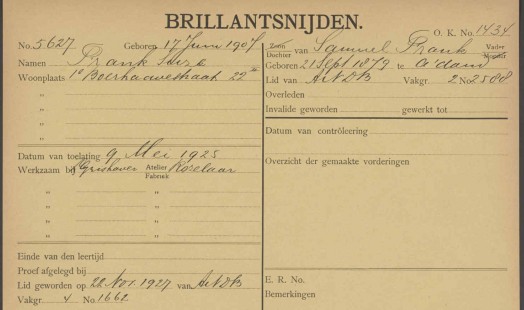 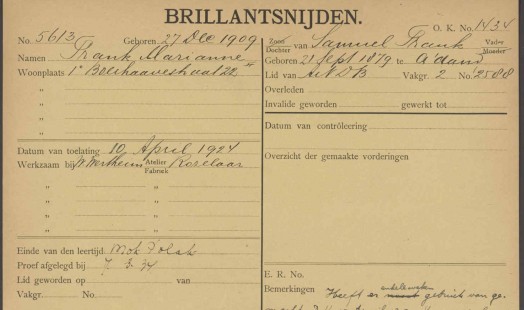 In the early 1930s Suze regularly lacked work. ‘Then you had nothing and just waited for your benefit. You’d rush your membership card over to the diamond workers’ union office, the ANDB on Henri Polaklaan [called the Plantage Franschelaan back then]. Climb those steep steps. “Many a tear was shed there.” [1] Although Suze was regularly unemployed in the early 1930s, she worked more often than others. She had a solid reputation, because she trained with a good teacher and was moreover fast and reliable. In 1935 when their father died, the two sisters continued living with their mother at 22 II Tweede Boerhaavestraat. Suze made 45 guilders a week, even during the Depression. She gave her mother 35 guilders for the household. From 1936 Suze and Marianne worked full-time again, both at Rooselaar’s factory on Oosterparkstraat. They liked to sing and were known as the duo, after a Swedish duo of sisters around that time. 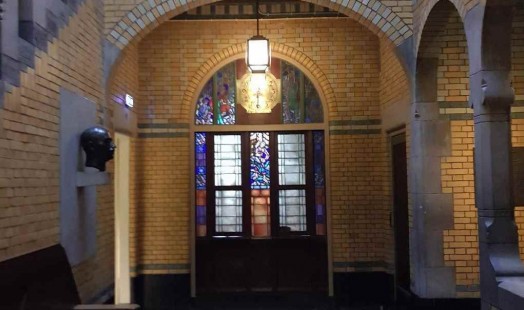 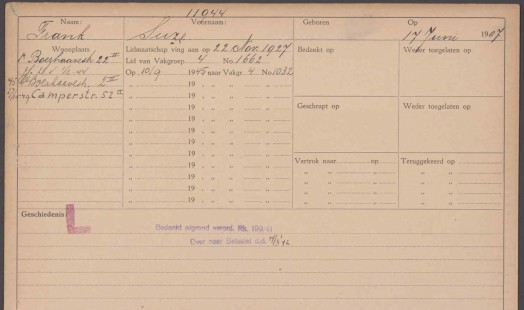 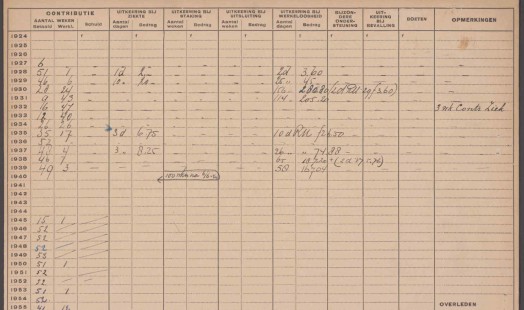 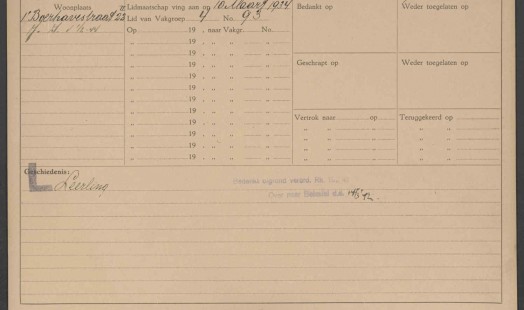 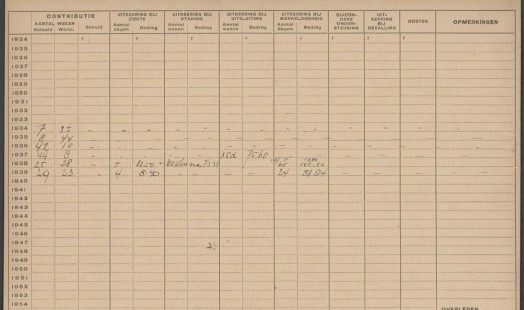 When the Germans invaded the Netherlands, and anti-Jewish measures rapidly followed, some Jewish diamond workers were granted a reprieve from deportation. Among them were the two Frank sisters, who obtained a Sperre (exemption from deportation). As brilliant cutters, a far less common occupation than brilliant polishers, they were particularly useful for the German war economy, which needed foreign currencies and used industrial diamonds in manufacturing weapons. In May 1943, when all Sperren for diamond workers were revoked, Suze and Marianne ended up in Westerbork as well, although they were ‘discharged’ from Westerbork in July 1943. Only the specialists were retrieved, including the two sisters, who by then worked as cutters at the Asscher diamond factory, one of the few factories still operating by then. They were assigned quarters at the Jewish Invalide hospital on Weesperplein. When this building was emptied in March 1944, they were transferred to the Asscher diamond factory, together with manufacturers and dealers. For a while they worked and lived there. 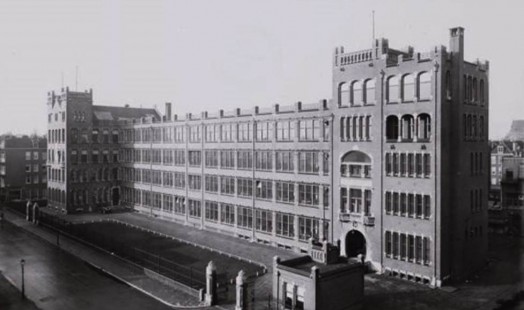 Request for exemption from deportation by Suze Frank 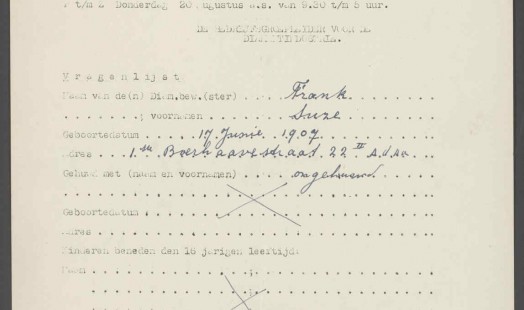 Suze Frank completed this form to request a Sperre: a provisional exemption from deportation.

Request for exemption by Marianne Frank 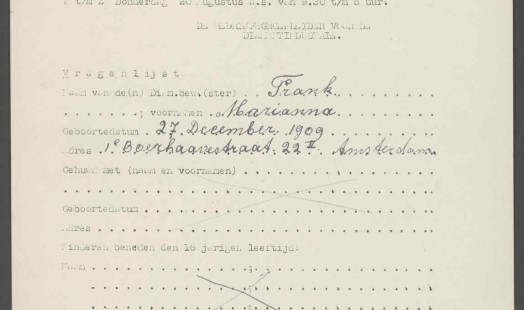 Marianne Frank completed this form to request a Sperre: a provisional exemption from deportation.

On 19 May 1944 the two sisters were transported back to Westerbork, from where they were deported to Bergen-Belsen. In late 1945 and early 1946 Suze wrote two very candid pieces about her experiences in the camps in the Weekblad van de ANDB. The section below is quoted from them.

‘Together with the employers from the industry, we were placed on a transport to Bergen-Belsen, where the highest agencies and many SS men awaited us. We were registered on arrival and assigned to a special barracks, No. 17. On one side were the men (about 140) and on the other side the women and children. Every day at appel (roll call), hundreds of us stood motionless for hours on an open site; in the summer the heat was stifling, and in the winter they sometimes had us stand in rows of five for four to eight hours. We were not forced to work, which other camp inmates resented. […] Friends and acquaintances who were not diamond workers were hiding in our barracks; for our own sake we had to remove them, and they were forced to labour as well. This was necessary, because it was announced that cutting machines and mills would be brought, and if it became known that they were not diamond workers, we would all be in trouble. [...] One of our diamond women, who was a secretary at one of the agencies, kept us informed. All of a sudden, the men were ordered to unload wagons with tools, which were stored in a barracks. They were closely guarded, and we had to clean the machines regularly. [...] Of course there were rumours that a factory was being built, and that not everybody could be assigned there, which obviously gave rise to more arguments. Months went by, and nothing happened.’ [1]

After half a year in Bergen-Belsen, the sisters were sent to various labour camps, including Camp Beendorf at Neuengamme, where they did forced labour in the mines. In early April 1945 the women were liberated, and the ‘journey through hell’ began. They spent days piled on top of each other in freight cars. On 1 May they were liberated from Camp Eidelstadt near Hamburg with 200 other prisoners.  Marianne Frank died a few days later at a hospital in Hamburg from the diseases she contracted and the injuries she sustained in the camps and during the journey. Suze travelled via Denmark to Malmö in Sweden, where she recovered in a refugee camp. 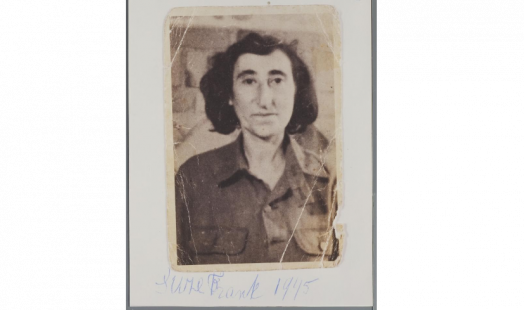 Photo of Suze Frank taken at the camp in Malmö, where she was able to recover. Jewish Historical Museum Collection. 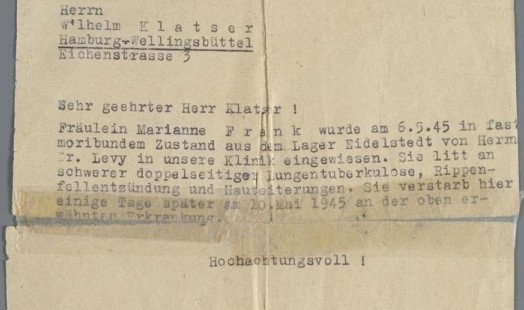 Back in the Netherlands, Suze resumed work as a brilliant cutter in September 1945. She remained a member of the ANDB until 1956, at which point the union was in dire straits. The industry had changed because the diamond workers had been decimated. Many of those who survived left the industry. ‘Some helpers became foremen, cohesion and solidarity disappeared, along with the old sense of responsibility. […] The joyful spirit had vanished, never to return.’ [1] Shortly before she turned sixty, Suze was declared unfit to work. She was happy to leave the industry that had changed so profoundly. She became a singer, often performing in cafés and theatres and at homes for the elderly. At the end of her life she enjoyed spending time at Beth Simcha, a society for Jewish elderly in Amsterdam. She died on 1 May 1988. 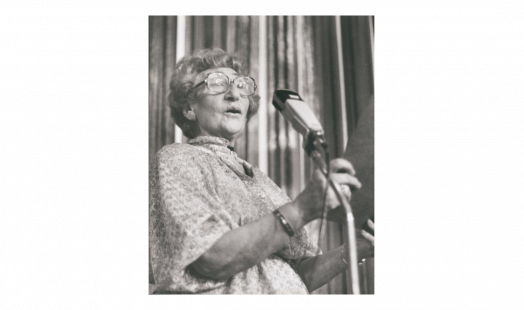